Skip to content
Named after Dr. Alois Alzheimer,who identified this form of dementia in 1906, Alzheimer’s Disease is a progressive, degenerative brain disease that generally leads to confusion, memory loss, depression, apathy, agitation, problems with perception, speech, trouble moving, and fearing things that are not there. Up to 70% of dementias are due to Alzheimer’s disease, with the diagnosis usually being made by ruling out other types of dementia.


Alzheimer’s disease (AD) occurs almost as often in men as it does in women, whereby early onset of AD appears before age 60, and late onset AD – the most common form of the disease – develops in people 60 and older. Several factors are believed to be involved in the development of Alzheimer’s disease, but none have been proven conclusively as of yet.Neurochemical causes are thought to include lack of substances used by the nerve cells to transmit nerve impulses (neurotransmitters), including acetylcholine, serotonin, somatostatin, substance P, norepinephrine, GABA, or they are comprised of elevated concentrations of extra-cellular glutamate, which are highly toxic to neurons. 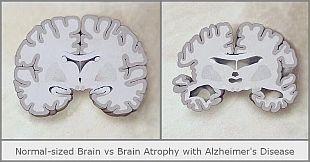 As a result, some researchers believe glutamate-rich food sources, such as MSG, to be of concern. The antiglutamatergic drug Memantine (Axura, Namenda) aims to restore a proper balance in the glutamate-NMDA system when it has become overstimulated by glutamate.Environmental causes that promote Alzheimer’s disease include above-normal exposure to Aluminum, iron, copper, zinc, manganese, and other factors. High aluminum (aluminium) intake in particular inhibits choline transport and reduces neuronal choline acetyltransferase. This may contribute to acetylcholine deficiency, which is a key component of Alzheimer’s disease. In some municipalities, drinking water contains very high levels of added aluminum.Infectious causes include Amyloid or Prion (virus-like organisms) infections, that affect the brain and spinal cord / central nervous system, and derived from a scrapie-like factor, a disease affecting sheep. Other risk factors include a family history of Alzheimer’s disease (there is a 5-10% inherited predisposition to the development of AD), a mutation of the APOE gene, Parkinson’s disease, apolipoprotein E-4, alcohol abuse, depression, head trauma (boxing), lack of mental stimulation (reading, problem solving, gardening), long-term electromagnetic exposure, and free radical damage (oxidative stress).Research is underway trying to slow the progression of Alzheimer’s disease by studying the neuroprotective effect of Vitamin D, or by using Antibiotics, following the discovery of an increased incidence of chlamydia pneumoniae infection in the brains of deceased Alzheimer’s patients. Chlamydia pneumoniae and mycoplasma pneumoniae have also been found with some forms of asthma, heart disease, and multiple sclerosis.
Dietary factors implicated with Alzheimer’s disease include the presence of AGEs (advanced glycation end products), as well as possible nutritional deficiencies that may include Vitamin A, C + E, and omega 3 EFAs (i.e. cold water fish). One trial found a Vitamin B6, B12 & Folic acid combination to slow brain shrinkage, which is a major risk factor for Alzheimer’s disease, while another study found that Alzheimer’s patients did not benefit from those remedies.There are also claims that Coconut Oil – being a rich source of Medium-Chain Triglycerides (MCT) – along with a low-carb diet, is able to reduce symptoms of Alzheimer’s disease. In one heavily publicized case, the antimicrobial effect of coconut oil reversed what was believed to be a herpes simplex-initiated development of Alzheimer’s disease.
Whatever the cause, the lesions and the damaged neurons eventually reduce blood flow to affected areas of the brain, causing hypoxic ischemia (oxygen deprivation).

Many of the studies done on Ginkgo Biloba in regard to Alzheimer’s disease showed that it had some ability to improve the cognitive performance and the social functioning of demented patients, at least at an early stage of the disease. At the same time, rats that were given gingko biloba lived longer then those that were not. In one study, the type of effects produced by ginkgo biloba in elderly dementia patients were similar to those induced by a class of drugs called Cholinesterase inhibitors – used to treat Alzheimer’s disease – which includes rivastigmine [39] (Exelon), donepezil (Aricept), and galantamine (Reminyl). Because of the potential to cause liver damage, tacrine (Cognex) – another cholinesterase inhibitor – is not much used any longer in the treatment of Alzheimer’s disease.

On a cautionary note, a couple of previously well controlled patients developed seizures within two weeks after starting to take ginkgo biloba, although they became seizure-free again after discontinuing the herbal remedy. Other potential side effects from taking ginkgo biloba include gastrointestinal discomfort, skin rash, bleeding, headaches, irritability, and restlessness. The question remains: Unless a treatment is able to reverse, or halt the progression of this disorder in its early stages, what is the advantage of taking drugs or remedies that are only able to slow the advancement of Alzheimer’s disease, and prolong the inevitable?

Both – Sulfur & Selenium – affect the central nervous system, provoking an inflammatory response as a result of excessive uptake / retention (such as with ALS), and provoking a degenerative response as a result of insufficient uptake / retention (such as with Alzheimer’s disease). Subsequently, dietary and supplemental sources of Sulfur should be adjusted accordingly when dealing with either condition.

The positive response to sulfur-raising therapy Dr. Ronald Roth had observed in patients suffering from Alzheimer’s disease has been inversely proportional to the progression of the disease, with sulfur levels of every patient tested having been from significantly below-normal in early stages, to totally deficient – or no longer being measurable – at late stages of the disease. On the other hand, not much of a variation in regard to sulfur levels was observed with the types of dementias associated with Vascular / Cerebral Sclerosis, or Lewy Body dementia.

Interestingly, sulfur is a very potent Aluminum Antagonist, which should satisfy those who maintain that aluminum is a significant factor with Alzheimer’s disease. Likewise, a majority of younger and older patients who were suffering from a “foggy mind,” concentration problems, and/or poor memory, showed below-normal sulfur levels, including many children or adults diagnosed with ADD / ADHD, as well as those who had actually been tested for elevated aluminum levels. Municipalities that in addition to fluoride and chlorine also add aluminum to drinking water certainly do not help those people struggling to maintain adequate sulfur levels.

Another dietary and potent sulfur antagonist is Copper, which is found in a variety of commonly consumed “addictive” foods and beverages such as coffee, cola, chocolate and cocoa products, as well as wheat germ, shellfish, soybeans, nuts, liver, and many other sources. A high copper / low sulfur status not only provides a biochemical platform that encourages the development of Alzheimer’s disease, but also promotes some forms of arthritis and vascular degeneration.

While some drugs or antibiotics may slow, or if it should happen – halt the progression of Alzheimer’s disease, sulfur supplementation has the potential of not only preventing, but actually reversing the condition, provided it has not progressed to a stage where much damage has been done to the brain.

One major reason for the increase in Alzheimer’s disease over the past years has been the bad reputation Eggs have been getting in regard to being a high source of cholesterol, despite the fact of dietary intake of cholesterol having little impact on serum cholesterol – which is now also finally acknowledged by mainstream medicine. In the meantime, a large percentage of the population lost out on an excellent source of sulfur, and a host of other essential nutrients by following the nutritional misinformation spread on eggs. Of course, Onions and Garlic are another rich source of sulfur, but volume-wise, they cannot duplicate the amounts obtained from regularly consuming eggs.

MSM (methyl sulfonyl methane) is another organic source of sulfur that is found in a variety of uncooked and unprocessed foods (eggs, milk, seafood, meats, cabbage, onions…). As a supplemental remedy, it was previously only used in veterinary medicine, but once approved for humans, it gained great popularity among arthritis sufferers.
Its availability for patients with low sulfur levels and corresponding memory / concentration problems – among other conditions – all the way to early or moderate stages of Alzheimer’s disease has become a major turning point in the successful treatment of low sulfur-related diseases, especially for patients who could not tolerate dietary sources of sulfur.

Nevertheless, in addition to supplementing MSM, Dr. Ronald Roth recommends the regular consumption of eggs, garlic and onions (when tolerance is not a problem) for patients whose sulfur levels test below normal for their many extra nutritional benefits.